Although Samsung is acclaimed for presenting numerous innovations, LG deserves some praise as well for unveiling more “experimental” devices from its curved LG G Flex to its recent dual-screen phones.

According to Slash Gear, LG seems keen at investing in radical innovation, even if they end up being a flop. The South Korean brand may be launching its craziest phones yet next year, which includes a rollable phone.

Samsung’s fascination with foldable screens aside, LG seems obsessed with rolling displays as can be seen in large TV screens that roll up when not needed. Similarly, LG has also been known for mobile phones that can be tucked into a more compact form when not in use, and then stretched like a tablet when needed.

LG’s rollable screen may sound like a wilder idea than a foldable display, but the former is easier to pull off since the screen can spread the pressure across a wider surface area. The problem is the execution of placing more rigid electronics like circuit boards and batteries.

According to The ELEC, LG already has a phone prototype, coded B Project, rumored after CEO Kwon Bong-Seok. LG has teamed up with China’s BOE in developing the screen. Last year, the Chinese company already exhibited a working rollable display. The B Project aims to inspire confidence and boost morale around LG’s troubled mobile phone trade.

If you think the rollable screen sounds outlandish, LG has also been rumored to be working on a “winged” smartphone which is said to launch in the latter part of 2020. The winged phone display swivels horizontally, which reveals a smaller screen at the bottom part.

LG now uses more descriptive names for its new line of premium phones, giving up its old number-based labeling scheme. For instance, the LG Velvet is named for its velvet-smooth design. 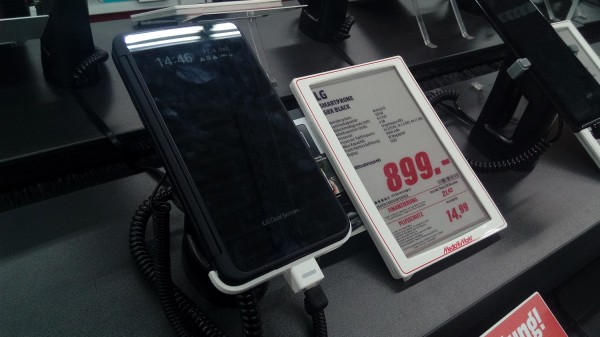 (Photo : Donald Trung Quoc Don/Wiki Commons)
A mobile telephone for sale inside of the local Media Markt-branded electronics store in the Low-Saxon city of Papenburg, Emsland.

Meanwhile, the phone codenamed “Wing” does not have a formal name yet, but some guessed it may be because of its T-shape that looks like a plane. Some also guessed that the second display is like a wingman, which is assumed to resolve some uncommon issues.

For instance, space and shape are two of the usual concerns of smartphones, regardless of their size. Their regular rectangular shape may make viewing some content awkward. This is the reason Samsung has created foldable phones to expand the screen real estate while Microsoft and LG have combined two screens.

While the exact function of this setup triggers our curiosity, the second screen could simply add another screen or a separate area for the keyboard, so it doesn’t block the main screen.

Whether LG will launch its innovative Wing phone later this year or unveil its rollable screen early next year is still uncertain. It is still too early to guess what LG has in store, although the company has been known for surprising the public with its experimental devices. This may urge developers to go out of the box with their creativity and innovation.

Out of Stock! Google Says Pixel 4 and 4 XL Are Sold Out, Just in Time for Pixel 4A's Launch on August 20

Somehow, Microsoft is the best thing to happen to Chrome

iPhone 12 or iPhone 13 could make Face ID much more secure with this...

Cuphead is coming to PS4, apparently. While the game has yet to see an official announcement on PlayStation consoles, a listing for the...