Apple’s iOS 14 will have a new privacy feature, however, Facebook and Google-backed ad firms are worried about the update. According to Techspot’s latest report, European advertisers are not happy with the Apple’s iOS 14, since the new privacy feature allows users to understand how an app uses their data, giving them an option whether to allow tracking for personalized ads or other purposes.

Also Read: Amazon and Microsoft Might Have Stopped Working With the Police on Facial Recognition, But They Can Still Get it From Others

The advertising companies are not happy with the innovation because Apple is determined to make them use new tools or apps that don’t require user tracking. When the company announced the new privacy features of iPadOS 14 and iOS 14, advertising groups have shared their worries, claiming that the new privacy feature will interfere with their abilities to target users with personalized advertisements.

Tracking many users across websites and apps is one of the common strategies used by different ad firms to improve other ads’ effectiveness. This technique allows ad companies to learn more about the user’s interests, allowing them to create a more detailed profile. The strategy also helps ad companies measure how effective an ad campaign worked without knowing your identity.

According to Techspot, a popup that asks for permission to do the necessary tracking and explain why it is important must be displayed by applications of users who upgrade to iPadOS and iOS 14, which use ads for monetization purposes. The way the new privacy feature is implemented draws inspiration from food labels. 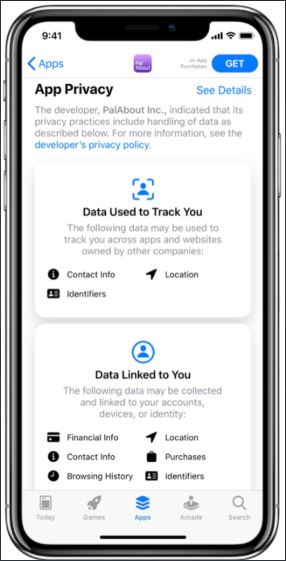 
IDK if you saw with the iOS 14 beta announcements, but Apple is also going to force app devs to describe their privacy policy in clear language on the App Store and require permission to track https://t.co/IzS1EEqFMs pic.twitter.com/VI8k3JpHQF — Dave Murdock (@davemurdock) June 29, 2020

According to the previous report of Techspot, details about how it is used and shared with third parties for ad tracking must be displayed by the developers. A hint in the status bar if the camera is recording will be displayed on iPhone devices that are running iOS 14, allowing users to upgrade login credentials to Sign in with Apple and opt for less precise location tracking.

Users will be asked for permission twice, making for an admittedly frustrating experience since both Apple’s new privacy policy and European privacy rules must be complied with by the applications. The new privacy feature might also make people believed that the ad tracking activity is something they need to think twice before enabling. Apple said that the update is developed to increase transparency on how users’ information is used.

'Not Charging' Appearing on Your Macbook on macOS Catalina? Apple Explains Why

Facebook Update: Here's How to Protect Your Messages from Prying Eyes

Newcastle vs Man City live stream: how to watch the FA Cup online for...

Nanoleaf’s new Hexagon Shapes are a surprisingly lively and organic addition to your home...